How do tsunamis differ from other water waves?

Tsunamis are unlike wind-generated waves, which many of us may have observed on a local lake or at a coastal beach, in that they are characterized as shallow-water waves, with long periods and wave lengths. The wind-generated swell one sees at a California beach, for example, spawned by a storm out in the Pacific and rhythmically rolling in, one wave after another, might have a period of about 10 seconds and a wave length of 150 m. A tsunami, on the other hand, can have a wavelength in excess of 100 km and period on the order of one hour.

As a result of their long wave lengths, tsunamis behave as shallow-water waves. A wave becomes a shallow-water wave when the ratio between the water depth and its wave length gets very small. Shallow-water waves move at a speed that is equal to the square root of the product of the acceleration of gravity (9.8 m/s/s) and the water depth - let's see what this implies: In the Pacific Ocean, where the typical water depth is about 4000 m, a tsunami travels at about 200 m/s, or over 700 km/hr. Because the rate at which a wave loses its energy is inversely related to its wave length, tsunamis not only propagate at high speeds, they can also travel great, transoceanic distances with limited energy losses. 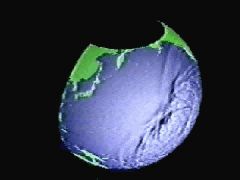 This animation (2.3 MB), produced by Professor Nobuo Shuto of the Disaster Control Research Center, Tohoku University, Japan, shows the propagation of the earthquake-generated 1960 Chilean tsunami across the Pacific. Note the vastness of the area across which the tsunami travels - Japan, which is over 17,000 km away from the tsunami's source off the coast of Chile, lost 200 lives to this tsunami. Also note how the wave crests bend as the tsunami travels - this is called refraction. Wave refraction is caused by segments of the wave moving at different speeds as the water depth along the crest varies. Please note that the vertical scale has been exagaerated in this animation - tsunamis are only about a meter high at the most in the open ocean. (The QuickTime movie presented here was digitized from a video tape produced from the original computer-generated animation.)